A Seashell Temple, A Glowflower Tree, and More Art Adventures at Burning Man, for Hyperallergic 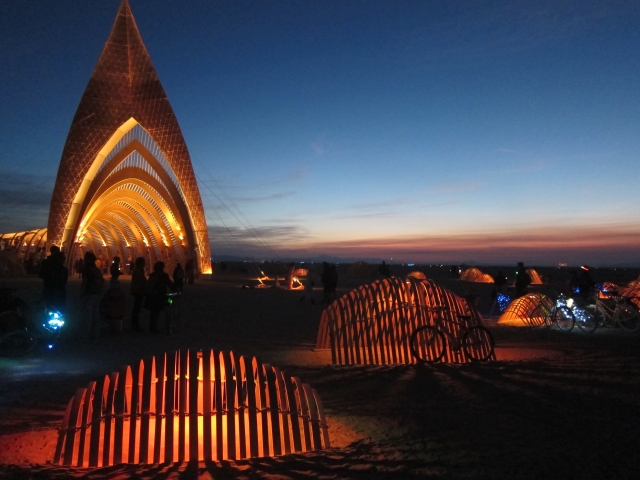 “Temple of Promise,” by Jazz Tigan and the Dreamers Guild

The playa is never silent; you adapt quickly to the spectrum of ceaseless noise, ranging from a low, distant hum with a faint pulse to a din with a beat that shakes the ground under you. The sounds of EDM, diesel fire, megaphoned hollering, laughter, live music, and sex are constant in the camps. At Burning Man, even dubstep makes sense: Its broken syncopations and surprise mechanized screeches are a perfect soundtrack to the halting journey of a bus shaped like a stegosaurus, a mammoth fossil, a casbah, or a Chuck Taylor sneaker as it inches past, resembling less a tricked-out vehicle than a giant mechanized toy simultaneously breaking down and lurching to life. Emerging from the camp radius and into the inner playa, it’s the music from the cruising art cars and the roar of their diesel flame-shooters that follow you, their various rhythms merging and clashing as you navigate the vehicles’ aural territories. 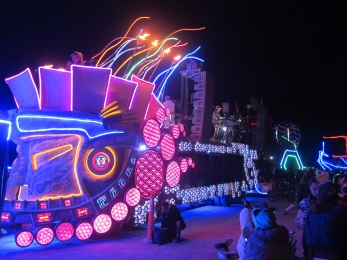 Something close to silence approaches when you enter the deep playa, beyond the larger art installations, beyond the Temple, close to the poignantly named Trash Fence that separates the parameters of the festival from the miles of flat desert beyond it. Maybe you start to hear the sex noises again — heavy breathing and the occasional moan drifting out from… it’s not clear where; it could be from miles away, carried on some wisp of wind through a gap in the pastiche of EDM, or you could have stumbled on some burners enjoying themselves away from their beds and campmates. Occasionally a goat bleats.

And something else is off: the moans aren’t coming from one place, but several different directions and distances. It’s surround-sound moaning and…surely that wasn’t actually a farm animal, was it? Neither of the men who squired you that night noticed or remembered it, and you worry what it might say about you that this is what your brain devises to  taunt you when left to its own vices. Later you find out you weren’t hallucinating, and you weren’t accidentally eavesdropping on all the fun apparently everyone but you was having (the recollection of the goat’s bleats hovering darkly in your memory): It was all a sound installation, witty but easily missed or ignored at a festival known for volume and spectacle. (Burning Man representatives had no knowledge of this installation.) 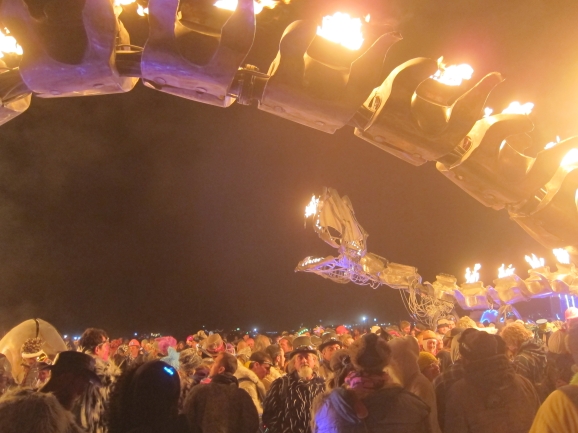 But the deep playa is, for the most part, a quiet place, with artworks placed far enough from each other that they disappear from view when the dust picks up. The installations built out there are smaller, less ostentatious; rather than dazzle, they invite contemplation. “Stargazers Anonymous” was one such piece, a circle of skeletal cubes and pyramids strung with dangling wind chimes and clusters of soft lights where one could sit quietly and enjoy the silence and the night without fear of being run over in the darkness by a bike or an art car (a very real danger on the playa). The night I visited, “Stargazers Anonymous” was being tended by a man I was pretty sure was himself made of stained glass. His head was a starburst and he spoke in poetics, calling himself Jingles.

Let’s say you’ve put yourself in the care of your two squires, depending upon them to reassure you that you’re not actually cold, you just think you’re cold — because that’s somehow better. You begin to hear the faint rhythmic thumping of some distant art car’s bass, and when you look to the far-off city, you see its colored lights break loose from their hubs and start bouncing up and up and over the arc of the sky, away from the city and toward the diamantine moon, which in the early night shimmers over the empty blackness of the outer playa beyond the Trash Fence. She looks best out there, pristine and proud and privately winking at you, just you. Later in the night she’ll float west and suspend herself above the city proper, competing with the thousands of lesser lights contrived from batteries and diesel and LEDs. You feel sorry for the moon, forced to share space with these pretenders, and ask her why she doesn’t float back to her dark silent kingdom over the Astral Plane, but she just shrugs. You can tell by the stoicism of her reaction that she regularly submits to this banal cityfolk schedule, and that makes you sad.

But your squires — you need them to concur that Jingles doesn’t really exist as we do, but maybe jumped out of one of those paintings in the Black Rock City Museum, the ones that were clearly painted under the influence of some amazing drug you’ve definitely never heard of, but you see that one squire cannot engage in this important conversation because he is sitting on the ground, cross-legged like a dusty Buddha, while Jingles paints starbursts and solar crescents on his face. Now his eyes are closed and his cheeks are sparkling and hatching smaller lights that rise like glowing steam and fly away, fizzing and popping and gliding along the Gallé sky. The other squire is shindig-shittingly sober; he informs you that Jingles the Starburst Man is not in fact made of stained glass but is merely wearing a white suit with LEDs sewn into the lining, and that he doesn’t speak in poetics, just with an Australian accent. 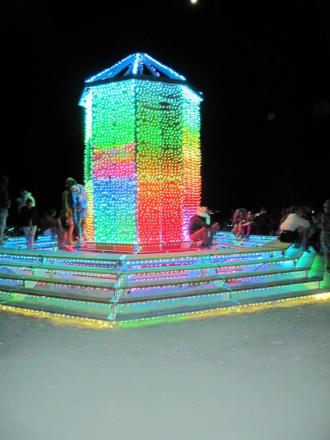 Not a champagne temple, no moat. “Reflect” by Awesome Co-op.

This squire won’t let you step over the Trash Fence and walk toward the moonbeam you can just make out about a mile or maybe five in the distance; he won’t even let you pee next to this nice police car parked conveniently in the darkness just beyond the halo of pink light cast by the bubbling champagne temple with the sapphire moat (which he claims is not a moat). In fact, he won’t let you pee next to any of the hundreds of police cars parked, sometimes three or four abreast, anywhere on the playa where people have congregated to dance or listen to music or watch a sculpture burn to the ground. What the hell is his goddamn problem, you discuss for the next four hours, and why is he letting those bureaucrats tell us where we can and can’t walk and pee, and why is he letting the moon languish in the firmament above the normal world with all the normies and their battery-powered banalities? He is cold, too, so you lend him the warlock cloak you keep in your tricycle basket, and it flows magnificently behind him as he rides toward the city — until it gets tangled in his bike chain and you both have to stop and park under the pulsing glowflower tree, with its blossoms blooming and unblooming and rainbow lightsap trickling down to its roots. You want to return to the Astral Plane beyond the Trash Fence and persuade the moon to light your path to those moonbeams she sprinkled at the foot of the Callico Hills so you can gather a few to put in your hair when you dance for the Shadow People. You don’t want to be stuck on the bourgeois Middle Playa searching for a bike wrench while your squire complains about his blister. 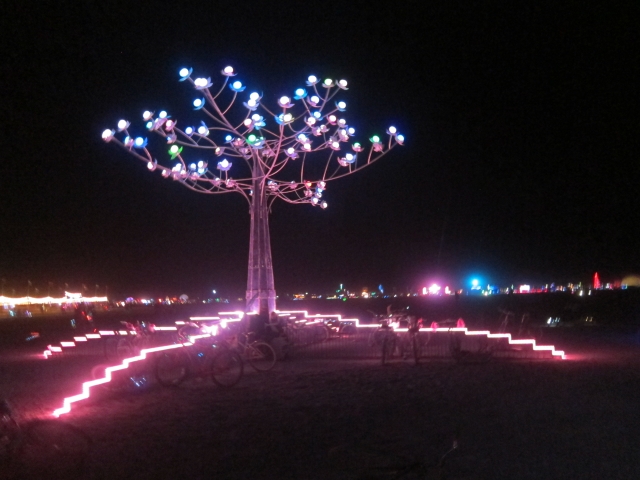 Not a glowflower tree. This is actually a bike rack. “TrEeD” by Tyler FuQua

Wherever you find yourself as the sky begins to blanch, you make your way to the Temple, which this year was designed by Jazz Tigan. Part seashell, part cornucopia, its walls feature horizontal wooden slits that allow the sky to paint patterns of constantly changing lights and colors on the interior, and from the outside, to show those colors and lights through the openwork façade. The Temple is a nondenominational sacred space where Burners leave remembrances of the dead and talismans imbued with their hopes for the living. Among the personal photographs and mementos are acknowledgments of recent publicly observed tragedies. This year there were altars to Black Lives Matter bearing vases of plastic flowers and framed images of victims of police brutality; in 2013 there was a memorial to the children of Sandy Hook. Next year may see shrines to the victims of attacks in Paris, Beirut, Mali … What hasn’t changed in the few years I have attended is the presence of so many photographs of young men: doe-eyed, pink cheeked youths who look as if they’d fit right in on the playa if they were wearing furry boots and facepaint instead of fatigues, young men who have been killed in some other desert in one of our interminable wars. (Continue Reading) 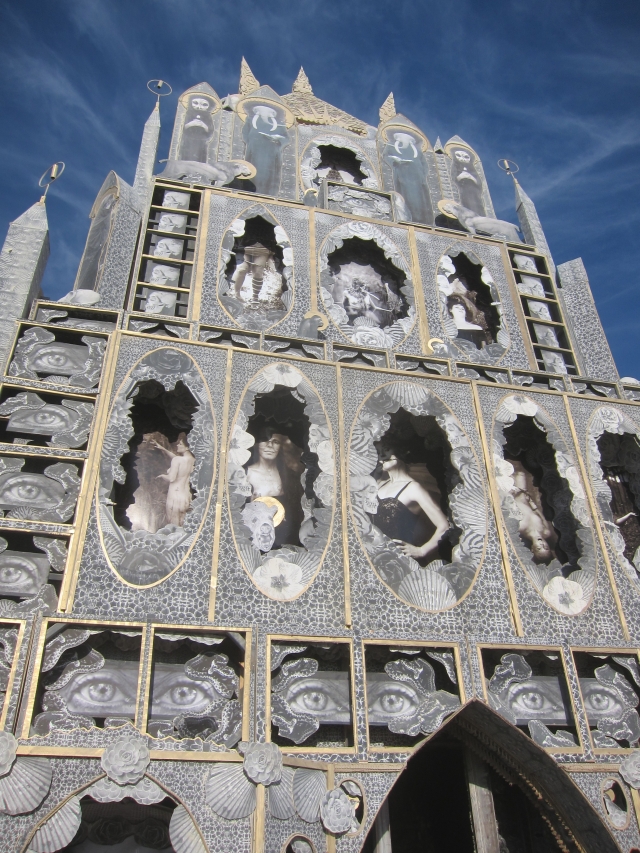 “Totem of Confessions” by Michael Garlington

2 Responses to A Seashell Temple, A Glowflower Tree, and More Art Adventures at Burning Man, for Hyperallergic