“The Hereditary Estate” by Daniel W. Coburn, for Art Practical 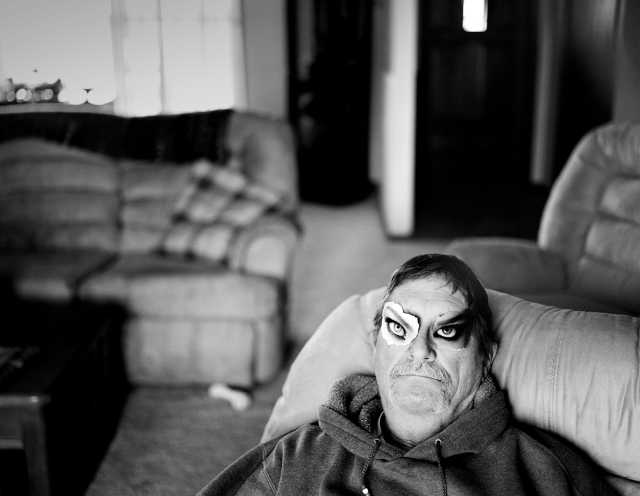 Along the road as I walked, thinking about the mysteries of Easter, veils—seemed to drop off my eyes! Light, oh light! I have never seen such brilliance! It pricked my eyeballs like needles!…yes, yes, light. You know, you know we live in light and shadow, that’s, that’s what we live in, a world of—light and—shadow…

Light plays a complex and outsized role in The Hereditary Estate (Kehrer Verlag, 2014), photographer Daniel Coburn’s “broken family album,” to borrow a phrase of the photographer.1 Light not only illuminates the vivid Southern gothic panache of Coburn’s subjects—his extended family in and around Topeka, Kansas—but also seemingly seizes and manipulates their actions, leaving them stunned and confounded. Take two contrasting photographs of Coburn’s mother, for example. In The Matriarch, a slab of harsh white light has fallen across her face as if with the force of a poleax. She lies on her side, arms stiff, mascaraed eyes staring blankly, looking as if she was felled rather than simply resting. In Divine Light, she stands backlit like a movie star against a backdrop of trees and a picket fence as a benign sun hovers beyond the branches over her head and radiates light through the fence posts. That glowing orb and its slanting beams seem to nudge her forward toward the viewer, and she stands with one foot primed as if ready to walk out of the frame.

The image is just this side of sentimental; the flattering soft light, pyramidal composition, and quaint setting almost produce the effect of a sugary religious tableau. But there’s something hard, pragmatic, and fully terrestrial in her eyes. While in the previous image his mother appears as the passive object of a malevolent light’s violence, in Divine Light she and the light appear to work in conspiracy with one another. Fluorescent flames in the image of a brush fire on the adjacent page lick across the grass, as if summoned by her from across the gutter to the other side of the book. 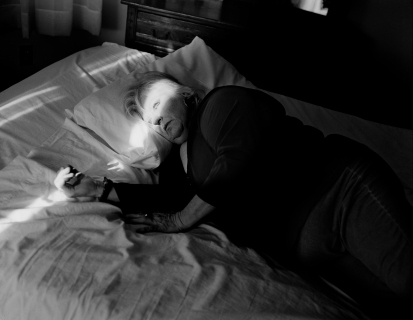 “The Matriarch” by Daniel W. Coburn, from The Hereditary Estate, Kehrer Verlag, 2014

The Hereditary Estate is full of images like these, in which light’s presence goes beyond merely coloring or enhancing the drama depicted, and becomes as much a dramatic persona as any of the people featured within. In Suspension, a woman hurls an armful of snow toward the camera, each flake blindingly white against the black background, the constellation of them obscuring her own form but for her mischievous grin on their apparent trajectory straight into the camera. In Communion, a man sits staring as if enchanted within a frame of Christmas lights, each bulb blurred into a spindly cross formation (presumably by Coburn shaking the camera during exposure). Through Coburn’s lens, light plays, sometimes with his human personages and sometimes at their expense. He includes found photos that he has also manipulated, scratching out faces, cutting and pasting photos together to produce dissonant, eerie vignettes, like one that depicts a woman embraced by a man, who is himself embraced and kissed by a slightly larger version of himself. 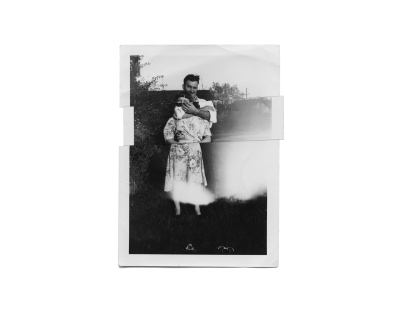 And in others Coburn uses props to devise odd, macabre, heathenishly mystical images. In Panoptic Stain, a man whose eyes are replaced with photos of eyes ripped from fashion magazines creates a portrait that is scary, repulsive, and momentarily believable. In Shelter, a child with muddy hands and an outgrown Mohawk peers through a broken turtle shell. The gesture is natural to the playfulness of childhood, but as with so many images in The Hereditary Estate, hints at something more. The impression the collection makes suggests the weird, ritualistic, DIY religiosity preoccupied with levitation and animism one sometimes hears or reads about coming out of the rural South, although there’s nothing in the book that indicates poverty, and Coburn himself is from San Bernardino. The objects in The Hereditary Estate seem like talismans, infused with metaphorical import by their handlers, who all seem versed in the language of some secretive local pagan/Christian patchwork spirituality to which we are not privy. In one image a pair of meaty hands wrap around the mother’s face like a Holy Roller pastor who clutches his congregant’s head, exhorting the spirit to drive out her demons or commanding her to speak in tongues. (continue reading)