I took a short trip to Florence and London before Christmas. I got stuck in Paris airport on my way into the UK and was delayed by a day and took the train instead, luckily one of the last before the Eurostar debacle. I still don’t have my luggage, two weeks later. But I had a great time nevertheless. This is me looking perky on the Arno. 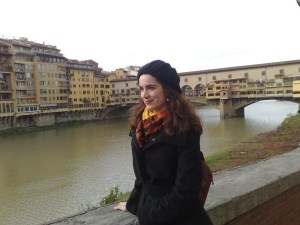 I always thought that this was called Piazza della Signorina, and that that was a very nice name to give to the civic center of Florence. Signoria makes more sense but is somehow less charming. 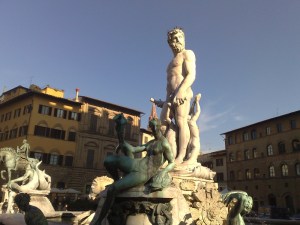 This is me on Via Cavour, around the corner from the Baptistry. Our hotel was once a mansion Franz Liszt bought for his girlfriend. Across the street was Rossini’s house and next to that, Pallazzo Medici. 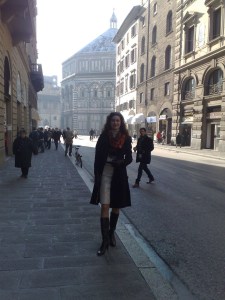 This is the library in the cathedral at Siena. 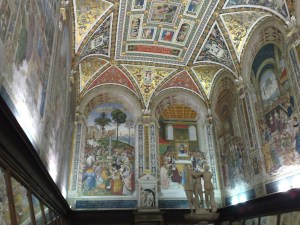 This is the outer wall of the Medieval town San Gimignano, famous for its towers and excellent white wine. 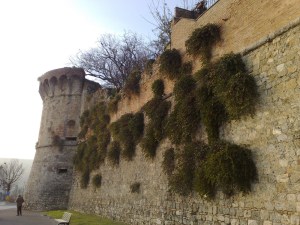 I was stuck in Paris overnight on my way to London. I spent several hours in line with customer service, and then another hour outside with all these people waiting to be taken to the hotel. But every bus that came by was for a different hotel than most of us were placed in. Each time a bus pulled up, people crowded around it with their red noses and screaming children and begged to be let on while the drivers physically blocked the doors and screamed “non!” before driving off with empty cars. No one was there to give information, but when I decided I couldn’t take it anymore, I wound my way back to the customer service desk where someone was yelling at the assistant in German, and realized that whatever he was yelling was probably similar to what I had hoped to address more temperately, and that my mission was futile. But then, someone who had been standing outside with me caught up with me to relay a rumor he had heard that they were giving out taxi vouchers since all the Air France buses had been canceled. I knocked a few old ladies over and punched a small child in the throat to get to the desk that supposedly held the vouchers. As I stood in line, I asked an air France employee who happened to be strolling by with an unlit cigarette in his hand (could the French be any more French?) if there were in fact taxi vouchers and if this was the right line to get them in, and he replied that yes, actually, all the buses had been canceled and that I was in the right line to get taxi vouchers which did indeed exist. I told him that there were dozens of people still waiting in the snow for the bus, and he shrugged and sauntered outside to smoke in the snow. When I got to the front of the line the customer service lady said, “wot taxee voushehrs? Zer arre non taxee voushehrs. You see zehr arre manee boeusses weetch arre coeumming…” A Scottish guy behind me yelled something incomprehensible at her, and I labored to maintain my composure against all my Ugly American instincts, and finally we both won our vouchers, and were immediately offered thrilling sums for them by the people further back in the line that had formed behind us and snaked across the terminal. I was turned down by five different drivers who either didn’t honor air France vouchers or didn’t know where my hotel was. By 3:30am I arrived at the hotel. 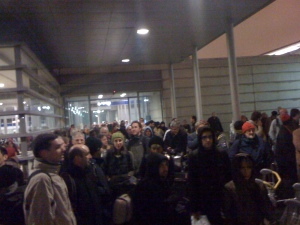 I was in London for another massive snowstorm. This is me in my old neighborhood on Kilburn High Road. 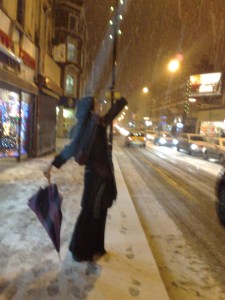 I had to glam up for Ben’s birthday but only had the clothes I flew in and no makeup. So Nat let me borrow her sequined minidress and Degie made me up like Cleopatra. My Ugg boots didn’t really match up, but whatevs. 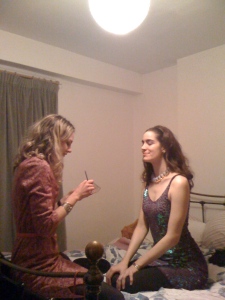 Camden town, as funky as ever. 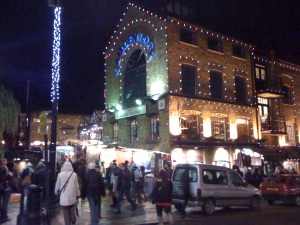 My friend Matt treated me to brunch at Fortnum and Mason’s. Scarves do a lot to help one appear elegant despite not having changed clothes in four days. The ace up my sleeve is that you can’t smell a photo. 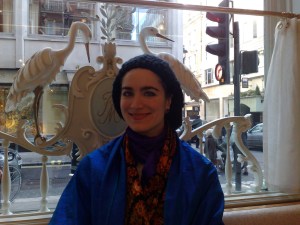 uh….maybe you should get high before watching this video. Even that might not help. I wasn’t sure if we were supposed to be doing an Irish jig or a highland fling, and I don’t know how to do either. Of course that didn’t stop me from trying. Laugh while you can, because Ben’s going to make me take this down when he finds out I posted it.

This entry was posted in my travels, rude french people. Bookmark the permalink.

1 Response to Florence and London, December 2009