some thoughts on OWS art

Posted on December 7, 2011 by Larissa Archer 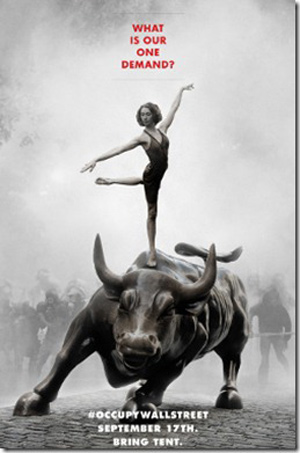 I’m late to this party, obviously, but I’ve enjoyed viewing the art inspired by Occupy Wall Street, and find a lot of it beautiful, provocative, and inspiring, an ideal combination for what is, forgive the now-derogatory term, propaganda. Some images are more successful than others in terms of aesthetics, but some also capture the ethos of the movement better than others as well. I recently came across a relatively new poster which, while stunning, is an example of not quite nailing the concept of OWS. I think comparing it to the first image in Adbusters’ initial call-out is the best way to delineate my thoughts on it.

The use of the bull in the original image was integral to its power. The animal had been symbolically appropriated for its instinctive aggression, the upward thrust of its attack (like the price of shares in a burgeoning market, geddit?) and sheer terrifying muscle, by an institution that flattered itself that adopting these qualities in the service of artificially inflating the price of wheat in Bangladesh was something to brag about. In Adbusters’ original poster, a ballerina balances on the bull’s back. Suddenly, the bull is symbolically reappropriated, its strength used in the service of art, the delicate, the feminine, these elements antithetical to the notoriously-misogynistic, brutally pragmatic world of Wall Street. The image implies the triumph of these elements—she is, after all, standing on the bull’s back, and high above the unrest on the ground, a visually dominant position. For all her barefoot grace, the ethereality of her limbs, the finely-whittled waist, the expression on her face is one of calm determination. Indeed, she seems to be staring down the bull as if to say, “Don’t even think of bucking me off.” Yes, she and all she represents have triumphed, but peacefully, without subjugation or violence; she is “occupying” the bull, so to speak. It was the perfect harbinger of a movement committed to the promotion of human achievement beyond the making of money, and that prides itself on (its own) peacefulness. 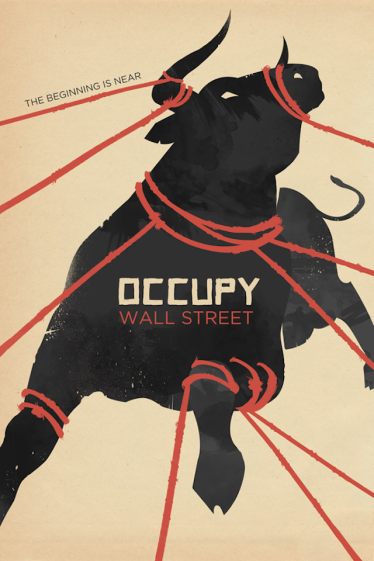 To be sure, this new image is a powerful one. Like the best graphic art inspired by the Occupy movement, its palette is minimal, composition simple, and message, unmistakable. But it troubles me anyway. I’m no PETA fanatic, but the suggestion of violence against an animal nevertheless leaves me uneasy, and conflicts, I believe, with the spirit of the movement. The artist did nothing more objectionable than what human beings from Aesop to Disney have done with animals–that is, anthropomorphise them with qualities they are incapable of possessing, imbuing his subject with menace by painting it with empty cartoon-demon eyes and hooves as sharp as its horns. But what comes across in the image is a desperate beast struggling against man-made bonds, possibly on the verge of being pulled apart.

I don’t think it’s what Occupy Wall Street should want to project to the world, though the movement’s treatment by the police and the state’s silence on the outrages is revealing a widespread culture of brutality and lack of accountability that the occupiers may well be tempted to answer with the sort of violence dramatized in the poster. Part of Occupy’s attractiveness (certainly its claim to the moral high ground) is its commitment to peace, its refusal to react in kind to the thuggery with which it’s been met. The poetic, slightly surreal image in the original poster set the tone, and that tone has not yet been altered by any change in tactic by the people marching, assembling, setting up tents, and running portable temporary libraries in cities across the globe. Let’s hope it does not get to the point where the second poster expresses the spirit of the movement more truthfully than the first.