It was hard to gauge whether anyone who attended Robert Reich’s City Arts and Lectures talk at the Herbst actually learned anything from it, or had hoped to. Given the city, and the politics of the speaker, and the audible hissing at every mention of Bush, Citizens United, the Bush tax cuts, Goldman Sachs (you get the idea), it didn’t seem like the audience included very many people who had come seeking to be dissuaded of their right-wing convictions. A less benign line of questioning from the interviewer, former UC Berkeley law professor Roy Eisenhardt, might have yielded some insights one couldn’t necessarily have surmised from Reich’s frequent contributions to NPR, TV appearances, his 13 books (for them what’s read ’em), or many published articles, but the discussion did remind one of how rare it is to witnesses a dialogue of such length and civility, regardless of ideological bent. Indeed, the ideas expressed onstage that night didn’t get much more inflammatory than, “It’s all Reagan’s fault.” (spoken in jest. maybe.), “Supply-side economics is a religion as is its sister, austerity economics,” and “How stupid do you have to be to vote down something that would keep student loan rates low?” Much of what Reich expressed sounded, well, sound, but without pressure from his interviewer to support his views more rigorously, the assumption seemed to be that there was a tacit agreement amongst his audience on what the facts were and that analysis of them, or even just common-sense consideration of them, would lead anyone to the same opinions. Perhaps this suited most of the listeners; the ones who participated in the Q&A period afterwards seemed well-versed on the subject (and there was a somewhat depressing, noticeable difference in the incisiveness of the questions from this audience and ones asked at artist-talks). But if one was hoping to glean something to supplement what one learns from the various most popular modes of passive consumption, cable news, its derivative satires, ideologically-emphatic podcasts and short-form opinion pieces, the effect of the talk was more a revelation of one’s intellectual laziness than an educative dialogue for anyone not already well-informed.

In other words, I, who have only ever read The Economist while drunk on Eurostar champagne (both complimentary in business class), left the talk understanding little more about economics than I came in with, save the unwelcome realization that the burden of educating me was on me, and not on Robert Reich. 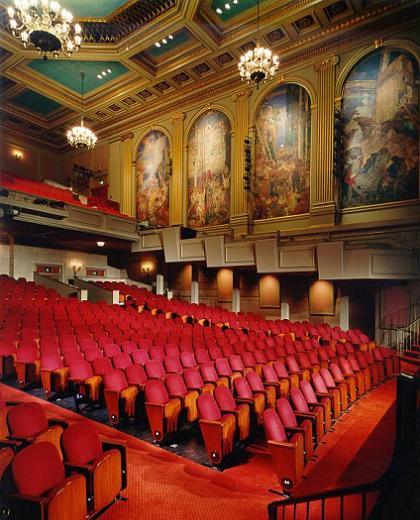 City Arts and Lectures hosts conversations and lectures by fascinating people at the Herbst Theatre in San Francisco’s Civic Center. I recently saw the eloquent and deeply charismatic photographer Sally Mann discuss her life and career, accompanied by a slideshow of her hauntingly beautiful, controversial photography. Upcoming speakers include The World According to Garp, A Prayer for Owen Meany and The Cider House Rules author John Irving (May 22), New Yorker cartoonist Roz Chast (June 5), General Colin Powell (June 7), and photographer Richard Misrach (June 4). Of course it’s a treat to get to sit in the elegant Herbst Theater, surrounded by Frank Brangwyn‘s murals, but when the Herbst closes next year for renovations, it will also be great to finally attend the Nourse Auditorium in the capacity for which it was built. In a disgraceful misuse of the facility, the city has for decades used the Spanish-Revival building as a storage facility for the San Francisco Unified School District. Let’s hope that this marks the house’s permanent return to its intended purpose.

1 Response to Robert Reich spoke with City Arts and Lectures