My feet hurt so good after the Black and White Ball. SF Weekly

If it’s June and after dark, and you see women tottering around Civic Center in gowns with color palettes from silent films and their dates’ tuxedo jackets on their shoulders, you’ve probably wandered upon the San Francisco Symphony’s biannual Black and White Ball. Preceding by a decade the identically named “pinnacle of New York’s social history” (Truman Capote’s famously lavish party at the Plaza Hotel), San Francisco’s Black and White Ball adds philanthropy to its hedonism — for more than 50 years the ball’s proceeds have supported the symphony’s robust music education programs, which benefit some 75,000 children each year.

…and here are my thoughts after attending:

A great party, whether it’s a few friends chowing on Smack Ramen and Schlitz in a dorm room or a high-ticket spectacle that takes over the center of a major city, is a work of art. It’s no small thing to orchestrate the convergence of personalities, guarantee security, book the entertainment (if the scale allows it), satisfy the talent’s whims, estimate and provide ample food, drink, and toilet paper — and to conceal the OCD detail-fixation necessary to pull it all off so that it doesn’t look and feel as regimented, micromanaged, and like it’s from beginning to end on the verge of collapse, which it definitely is. It requires, as insensitive stereotypes would have it, Italy’s sense of fun, Germany’s discipline, and Russia’s pessimism. It’s why successful party planners are paid 1-percent-worthy fees.

Saturday’s Black and White Ball, the ne plus ultra of Bay Area fancy dress fun, demonstrated this to dazzling effect. The festivities, tickets to which started in the hundreds of dollars, occupied (ha!) the War Memorial Opera House and the stretch of Van Ness between Grove and McAllister. Depending on one’s musical tastes, at any moment one had several bands to choose from playing outside or in the halls and tents erected for the event. Munching on dim sum and making pitstops at the bars stationed every four or five feet, one could drift from salsa in Herbst to a funk band in City Hall, or see Janelle Monae in the Tent Pavilion or stand outside and watch Cyndi Lauper do a somewhat less-energized performance than what we ’80’s babies remember her for.

Despite the crowds there didn’t seem to be any particularly long lines for anything but City Hall’s women’s room. Bins for garbage, recycling, and compost were easy to find, and there were plush couches to sit on and people-watch when your feet got tired. The colored lights beaming from City Hall through the fog made Civic Center look like a Monet painting, and when clouds of white confetti were released for the midnight surprise, the lights shining off them as they spun and floated to the ground made it seem like all of San Francisco had been glitterbombed. It was cold out, but the tents were heated, and if you kept dancing, even outside you could stay cozy. 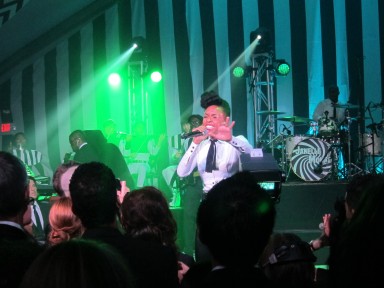 The midnight surprise itself was a moment of tear-jerking, unabashed city spirit, as motorized cable cars rolled down Van Ness carrying gleeful mimes and dancers in lobster costumes, who spilled out and induced, by sheer force of cuteness and puppy-enthusiasm, even the squarest couples to dance like no one was watching (which everyone was, on giant screens, and pointing and taking pictures and uploading to the internets — or was that just me?), as Glide Memorial’s choir sang. (continue reading)