As futile as it is to try to sum up the best arts events a cosmopolitan city like San Francisco offered in a year, especially with a mere 1200 word-count, I gave it a try for Art Practical. I settled on two photography exhibits, one by a legend (Lee Friedlander) and one by a future-legend (Chris McCaw), a burlesque show by the great Dita Von Teese (whom I interviewed here), and a new ballet, Francesca da Rimini. How I wanted to wax long-winded about the stunning Gaultier fashion exhibit at the De Young, Alvin Ailey American Dance Theater’s visit to Berkeley, Reborning and Honey Brown Eyes at the San Francisco Playhouse, Renée Fleming’s Lucrezia Borgia at San Francisco Opera, or SFMOMA’s Francesca Woodman retrospective! But outside forces of shindig-shittery limit my ramblings. This is probably for the best. You can thank my editors.

On Dita Von Teese’s “Strip, Strip, Hooray!” at The Fillmore: She doesn’t appear concerned about pleasing her audience at all, just calmly confident that she indeed does. Von Teese’s prowess hinges on the iciness of her stage persona, the discipline of her stillness, the sense that no matter how few and tiny the vestments she stripped to, she was withholding far more than she gave. And so the kind of foot-stomping frenzy that other dancers that night had to give their all for, Von Teese inspired with the simple act of undoing a single button.

On Lee Friedlander’s “Mannequin” at Fraenkel Gallery: Both wear the sort of underthings you wouldn’t actually wear under anything; one presents a stockinged leg, the other, a paddle. They both stare suggestively outwards but, seen from a street that’s empty except for a few parked cars reflected in the windowpane, what was intended to be an enticing scene transmogrifies into a comedy of misfortune: All dressed up and no one to spank. 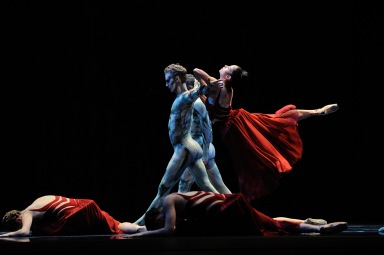 On Chris McCaw’s “Ride into the Sun” at Wirtz Gallery: But the resulting image is more than a failure of the representational function we expect from photography. The arcs seared through the photo paper connote the passage of time, proclaim the physicality of photography’s seminal processes, and add a tinge of violence, a brutal grace to the dark, still gorgeousness of McCaw’s landscapes. (continue reading)