Woman of the Ouled Nails, Algeria. Ètienne and Louis-Antonin Neurdein, c. 1880. Original photograph on albumen paper from a collodion

The Museum of the African Diaspora is hosting two small but excellent shows this month. “Desert Jewels: North African Jewelry and Photography from the Xavier Guerrand-Hermès Collection” features tribal jewelry and nineteenth-century photographs from an era when  advancements in photographic technology allowed documentarians and artists to take advantage of and further intensify European fascination with the Orient. Previously, photographers had to carry equipment both cumbersome and easily destroyed by the heat and sandstorms prevalent in the region, and because of the long exposure times needed, mostly made images of static scenes: landscapes, archeological dig sites, and monuments. But the development of the collodion glass-plate negative and the later invention of the Kodak handheld made it possible to capture street scenes and people. Photographic studios opened in major cities in Morocco, Turkey, Egypt, and Algeria, catering to both practitioners and tourists. They produced a not-quite-trustworthy record of life in these colonial regions. Photographers often staged scenes to fit an exoticized European idea of the East, rather than faithfully documenting it. The results, though often gorgeous, reflect the patronizing attitude at the heart of infatuation: the truth bears little importance next to the myth, which is itself more a portrait of the infatuated than of the object of infatuation. Europeans held dear the notions of their own societal, even genetic, superiority, and enjoyed observing a contrast between what they regarded as evidence of their own highly-civilized society and the colorful but lagging cultures they oppressed.

Portraits of black men in profile were used in the pseudoscience anthropometry, which sought to classify human beings along the evolutionary scale according to race, and, specifically, skull shape.

Photographers often used studio backdrops rather than capturing their images in situ, and paid models to pose with props and in stylized dress to cater to a particular European fetish for the louche, sensuous Orient of myth. The French, whose women were still binding their own torsos in rib-crushing corsets, loved the images of these women who were costumed and deported to more frankly proclaim their roles as owned objects of pleasure. Always bejeweled and dressed for easy access (ideally with at least one nipple visible), they often held a musical instrument or waterpipe and lounged in fabricated studio settings which sometimes even included a barred window in the shot to suggest the photographer had gained entree into the secret, off-limits world of the harem.

While the collection, and the movement it arose from, is not presented as ethnographically accurate, it does offer some revelations about the lives of the diverse peoples represented. In the show’s catalogue (Museum for African Art, 2008) author Cynthia Becker cites curator Christraud Geary’s analysis of colonial-era photo-postcards from Africa: “…(she) encourages scholars to consider African photographic subjects as active agents who asserted views of themselves and represented their personal, social, and religious identities through particular props, clothing, and poses…” and deduces the background of one of the Tunisian models in the collection by the musical instrument he holds. The stringed lute gombri identifies him as a descendent of the enslaved Sahelian Africans, brought to North Africa in the trade and who, upon the banning of slavery there,  became healers who used such instruments in possession-trance ceremonies. Also historically interesting are the images of the women of Ouled Nail (ex. above), the world’s first performers of what we now know as belly dance. Graceful, dignified and magnificently robed, they nevertheless have the exasperated look in their eyes of women whom poverty has dispatched into a life of providing light entertainment for the French.

However, despite some few bits of truth eeking past the fiction, the collection overall carries the tone of romance, of artists manipulating life to fit a fantasy, and of subjects patiently enduring their reduction into personage. In one photograph (for some reason not available for reproduction in the press) featuring the popular harem motif, two reclining women hold musical instruments, but the third is doing the artist’s model equivalent of “phoning it in.” She slouches against the pillows with her head resting on her hand, glowering at the viewer with unmasked bitterness, as if she recognizes that what she is contributing to but has little control over is her own fetishization. “Really? This panto again?” she seems to be thinking. It is hard not to feel that simply by viewing her one is complicit in her exploitation.

So, while the photographs in “Desert Jewels” are themselves of dubious documentary value, it would be helpful if some of the ways in which the photographers of the era stretched or distorted the truth were explained–if this is a romanticized view, what is the unromanticized one? Ok, it is unlikely that any Western photographer would ever have gained access to the interior of a harem, and they often chose to emphasize a European caricature of the “lascivious” North African woman rather than simply take portraits of people as they were, in the settings in which they existed; why is that, and what aspects of day-to-day life fell so short of the fantasy that the majority photographers, or their public, chose to let them go undocumented? The museum and the writers of the accompanying book didn’t elaborate. Even if the work, or this collection, is not presented as documentary in nature, simply stating that a lot of the images diverged from reality to fit a romantic ideal raises the question of what exactly that reality was. 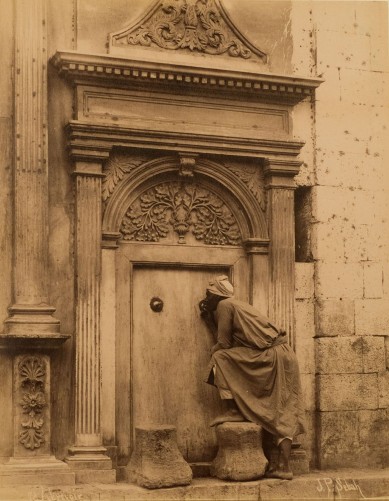 Still, since the collection can’t offer documentary truth, what one is left to seek is, simply, beauty: and that it has.  The images in Desert Jewels do what the best art does: they make one curious about a world possibly very different from one’s own–filled with people who look different, dress differently, walk different streets, tell different stories and worship a different god, whose whole Weltanschauung might seem utterly foreign, and yet in them one can also see occasional evidence of our commonality. It is usually in the eyes; the shrewd, calm stare of the perfume sellers, shared by anyone who has perfected the art of sizing up and selling luxuries to the less-shrewd. The stricken expression of the Ouled Nail girl, one that you can still see on the faces of young women who receive more attention from men than they want or know how to handle. 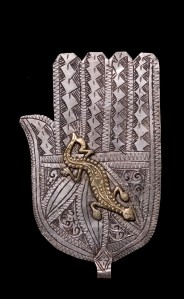 The other, flashier section of the ‘Desert Jewels” exhibit features actual jewels. Much of it is Amazigh jewelry, referring to the original inhabitants of North Africa, from the area known as Maghreb, the Arabic word for the West (the crossroads of the Middle East, sub-Saharan Africa, and Europe).  Amassed by the man whose name represents the sort of jewelry and accessories you buy when you want to show the world you have lots of money and no stylistic courage, it is interesting that his personal tastes run towards these rugged, hand-hewn, tribal objects. All of them are “big” compared to the kind of jewelry we wear, and none of them were worn alone. North Africa never got Chanel’s memo about taking one thing off before you leave the house. The amount of jewelry the average western woman would dare to wear and still worry was “too much” fell off an impoverished Tunisian girl every time she sneezed. Head ornaments, fibulae, bracelets, necklaces, belts, amulets, all carried symbolic meaning, as well as aesthetic value.

Certain shapes and materials provided protections against both outward and inner evils, such as jealousy. The hand of Fatima, or khamsa, is the most prevalent and usually includes Hebrew or Arabic inscriptions. The striking thing about the collection is not only how beautiful so much of it is, but how paltry our own aesthetic seems in comparison, how timid, how full of fear–because we don’t just get to see the jewelry as disembodied objects, we see in the vintage photographs how they flatter the body, how mixing them up and wearing them all together does not, as our pedantic style gurus would say, make the look too “loud.” We see how meaningless is the phrase “less is more.” A visit to this exhibit should have a shaming effect upon anyone who has ever pared down their look in an effort towards “tastefulness.”

Finally, the other exhibit at the Museum of the African Diaspora is selections from local photographer Elisabeth Sunday’s monumental series “Tuareg” and “Anima”. Using a flexible mirror she created for the purpose, Sunday photographs her subjects, nomadic women from the area ranging from Algeria to Mauritania to Mali and Niger, in the act of arranging their wraps. 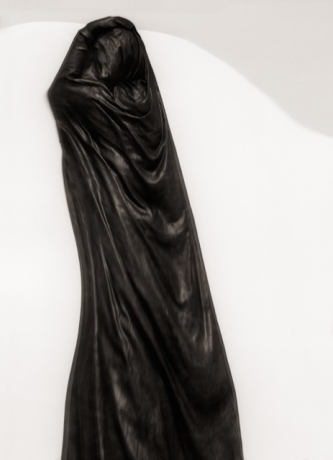 A sort of analog photoshop process, her method of photographing these women emphasizes and enhances their grace, elongating the body and the folds of their shawls, creating an impressionistic effect one might be used to seeing in painting but which is unexpected in a medium from which we often expect a more literal representation. The effect is closer to that of dance, in which the body has reshaped itself and learned to move in a way that proclaims and exaggerates all its best qualities, while momentarily silencing its flaws, and in which movement itself has an aesthetic, rather than merely practical, purpose. The images are stunning. Go see them.