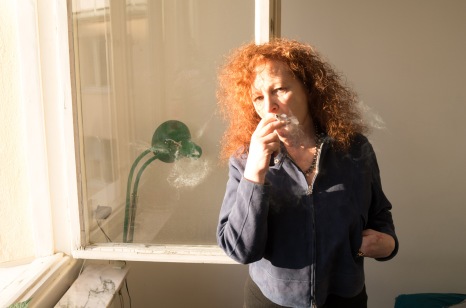 Out of the ash

I rise with my red hair

Though the collection is small — only 9 photographs — “Nan Goldin: Nine Self-Portraits” nevertheless invites one to compare the existence described therein with the one, the many, revealed in previous collections such as her diaristic Ballad of Sexual Dependency and I’ll Be Your Mirror, her 1996 survey exhibition at the Whitney and its catalogue. There’s an evolution apparent in the woman portrayed in Goldin’s previous works and the current show.

Tube tops and scuffed satin pumps have been replaced by blazers with shoulder pads. Where her makeup had smudged and run on skin dewy from heat or exertion, or simply from staying up all night, it is now drawn in hard, precise lines or absent altogether. Self portraits in dingy club mirrors have their equivalent in a new self-portrait in a mirror, but this one is a beautiful, time-damaged antique in a palazzo in Venice. The settings of Ballad and Mirror were often cluttered, trashed, even, and look like they smelled of  sweat, cigarettes, unwashed hair, and booze. The settings here are uniformly cleaner, and look like they smell fine or not at all. The lighting is often softer, more flattering. It’s all gone a bit middle class. There is almost no suggestion of the life that was lived and described in Goldin’s earlier works; indeed, although the premise of this exhibit is different from those, focusing on Goldin herself rather than Goldin and the various personages within in her close circles, the absence of other people lends a heaviness to these images when one considers that many of the people Goldin photographed over the decades, her close friends and the inhabitants of that bohemian world of lower Manhattan in the ’70’s and ’80’s, were felled in the AIDS epidemic or lost to drug overdoses. Here she stands “as witness to the common lot/ Survivor of that time, that place”i – alone, and in settings sanitized of the gritty theatricality of her former haunts.

Although she was clearly not a passive sitter in her earlier work, when she turned the camera on herself in those years, the “face” she gave often conveys a softness and passivity, or at least a neutrality, a quiet presence that sometimes is upstaged by her more presentational subjects — the drag queens, the more showily emotive girlfriends, her glowering ex-lover. She often appears with no expression on her face at all, even when staring out through blackened eyes after she has been beaten by her then-boyfriend. Or she listens with eyes downturned, pouting almost imperceptibly as a man sidles up to speak more closely to her. The most she expresses through her face is an occasional wan smile or the demoralized, red-nosed moment before the tears fall.

But in these self-portraits on display at Fraenkel Gallery, there has been a switch. Instead of featuring others playing their respective roles in her life, she seems to have assumed multiple roles herself. The locations and situations are more ambiguous but the experiences she reveals through her face have intensified; it’s like more of her personae have come out to play. In one, she sits at a clean marble vanity mirror, notepad in hand. In her blazer, with a calm smile and direct gaze, she looks as if she could be giving herself a pep talk before an important business meeting. In another, she stares out the frame into the hot light of a brilliant sky with the wall-eyed omniscient gaze of a visionary mystic. In Shadow of a Dead Bird on Simon’s Window, Stokholm (2013), she stands smoking by the open window where “the smudge of ashen fluffii” still marks the pane. The cold toughness in her eyes, almost a warning, wouldn’t look out of place were she flanked by a row of heads on pikes. 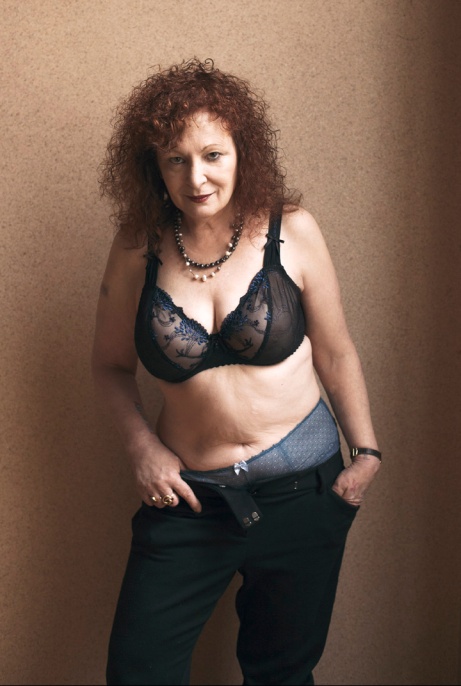 But perhaps the most provocative piece is In my hall, Berlin (2013), in which she stands in unbuttoned trousers and a bra, high-waisted panties askew over her hips, one thumb in her belt, her eyes knowing and defiant, her lips curling into a smirk. One doesn’t often see a woman of her age present herself in this way. Her body is lush but looks “lived in” in the way that women are taught to be ashamed of and hide. But she’s wearing lingerie — as opposed to underwear — made from black and blue peekaboo mesh, the kind that reveals all the bits it pretends to conceal. She looks incapable of shame, oblivious to self-doubt, invulnerable to “dependency,” hungry, and like she fully expects to get her fill. And yet in another, earlier, photograph, in bed with her lover and looking up at him tenderly, she is too timid (possibly) to have taken off her bra before the act of love commenced. The Nan of In my hall looks like she’d toss her bra over the bedframe and climb on top.

Much of Goldin’s earlier work, the work that made her name, captured the vivid atmosphere of a world of which she was a part, and which now only exists in our cultural mythology and the memories of and artistic documents created by its survivors. The world of “Nine Self Portraits,” on the other hand, is interior, and its atmospheres are psychological, transmitted through her eyes and mien. It is more like a journal than a diary, an account of her inner, rather than outer, life. This work is less showy but more complex and quiet, its subversions creep up on one rather than smack one in the face.  One hopes that this is a world she will continue to explore and share as generously as her previous ones.

i“No foreign sky protected me, /No stranger’s wing shielded my face./ I stand as witness to the common lot,/ Survivor of that time, that place.” – Anna Akhmatova, 1961

ii“I was the shadow of the waxwing slain/ By the false azure of the window pane./ I was the smudge of ashen fluff, and I/ Lived on, flew on, in the reflected sky…” Vladimir Nabokov, Pale Fire