“Anonymization”: How Urban Sprawl Created a Homogenous and Hostile World, for Hyperallergic. 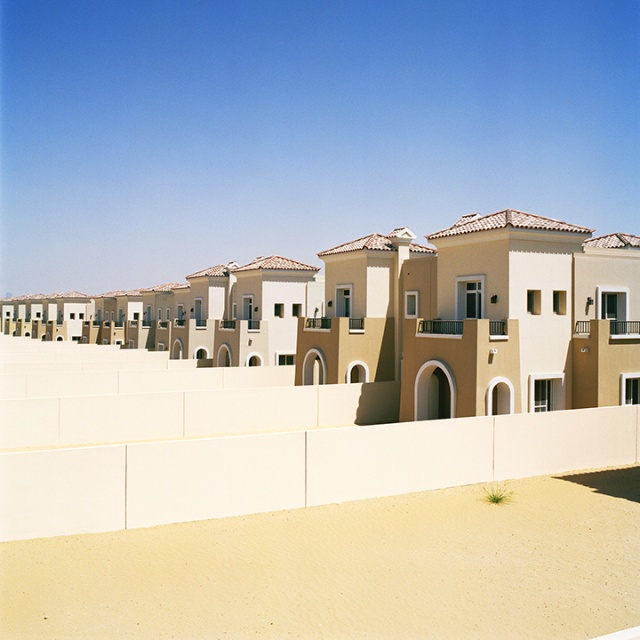 LOS ANGELES — The list of ways the US has negatively influenced the rest of the world is long and shameful: unnecessary, interminable wars, nutritionally inane fast-food chains, a habit of wasteful consumption based on instant obsolescence. The list goes on, and one can see why at least some of our exports caught on. The notion of urban sprawl is not one of them. Surely, you’d think, a glance through snapshots of any one of our thousands of forbiddingly bland suburban communities would make a country accustomed to walkable cities, villages, and farms, architectural diversity, and efficient public transportation, politely decline. But the US has successfully exported not only the idea of sprawl, but the look of it as well, and there are communities (for a more appropriate word does not exist to describe something so decidedly anti-community) in South Korea, Greece, Spain, the UAE, France, and Germany, that no longer resemble their native cultures and could easily be mistaken for Walnut Creek.

When photographer Robert Harding Pittman was studying at the California Institute of the Arts, these developments were metastasizing all over Los Angeles; when he moved on to study in Spain, identical developments were creeping into view there. After years of photographing the preparation of the land, the erection of prefab boxes, the laying down of miles of asphalt, and the half-formed structures and detritus left when building was halted in the wake of the economic collapse, Pittman published Anonymization (Kehrer Verlag 2012). A showing of the series is up at Spot Photo Works in Los Angeles through June 16.

Pittman wisely chose to group the photographs by stages of development rather than by location, preventing the reader from picking up on the distinctive features of each place and instead paying attention to the processes that render those locations indistinguishable from each other: Sacred Ground (first stages of ground preparation), Conversion, Prefabricated, and Aftermath. Fouled soil and gravel piles look the same in Dubai and Seoul; this or that tract housing complex could be in Las Vegas, Los Angeles, or Murcia, Spain. Abandoned structures look sad and effete in the Peloponnese Peninsula or in Alamogordo. In deliberately confusing the locales and effacing their individual characteristics, the work communicates the ruthless ideology behind developmental sprawl. The peculiarities of place — the natural environment and topography, the architectural styles, anthropological elements such as how the people of a given place have historically lived and socialized, even the local availability and sustainability of necessary resources — none of that matters. If developers seek to make their constructions attractive to an affluent clientele, one that might require access to clichéd Western one percenter hobbies like golf, they’ll make that golf course, dammit, and pump in the water for the buzz cut grass lawn whether it’s in Benidorm, Spain, or the middle of the Arabian Desert. When the money dries up or the global economy implodes, developers all abandon the projects at whatever stages they have reached with equal disregard for the desecrated landscapes. These ruins do not turn into Ostia Antica. Spilled nails stain Spanish pavements with rust, skeletons of single-family homes perch atop Grecian hillsides, palm trees planted ready-grown into Emirati yards dry out and die in the absence of the high-maintenance irrigation systems necessary to sustain them where nothing was ever meant to live.

Yet what no doubt appears as a shameful blight on the natural world makes for elegant, even beautiful photographs, and probably more so for those whose tastes lean towards the stark and geometric. Minimalists who want to prove they have a sense of humor should buy these prints. It’s hard to believe that anything aesthetically pleasing could be found in the parking lot of Dubai’s Mall of the Emirates. But Pittman found a pristine patch in the lot where the lilac pavement is still unmarred by tread marks, where the angles of the painted white stripes and the concrete stoppers create an immaculate, yet dynamic composition — the stoppers somehow conveying speed despite their stillness, like lined-up torpedoes. A line of spookily identical houses looks like one house, seeing its own reflection in a pair of infinity mirrors. A lone, intrepid weed has sprouted against all odds in the front, or back, “lawn” or driveway (it is unclear which, as it is just sand) of one of the houses. In a vista of beiges that even bleed into the blue of the sky, this spot of green is like a rebellion; the starburst pattern of its stems and leaves look as if the plant burst out of the ground in glee, unaware of the crushing, unnatural hostility of its new surroundings. (continue reading)

2 Responses to “Anonymization”: How Urban Sprawl Created a Homogenous and Hostile World, for Hyperallergic.