My mom and I threw one of our famous grove street parties for my 30th birthday, even though my actual birthday is not until the 24th. My original plan was to return to New York after the holidays and have my birthday there, and so we had to get the party in early if I wanted one at home. As it turns out, while I was here I auditioned for and won the role of Catherine in a production of Suddenly Last Summer, so I’ll be staying a while longer anyway. Here I’m wearing a pearl necklace my mother made for me as a gift. 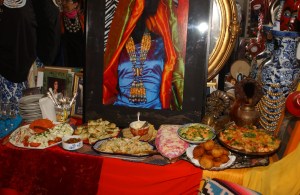 We really went too far with the food, as most of my Russian friends contributed dishes. We had steamed baby potatos with cream and herring, piroshki, caviar blinii, “herring in a fur coat” which is the pinkish boat-shaped dish above, a delicious herring and beet concoction, my own top-secret world-famous cured salmon on cream cheese and bread (this salmon is the only food I know how to prepare besides spaghetti and cereal, and I think it is enough), deviled eggs, two different Georgian garlic-aubergine dishes, potatoes Olivier (this is some sort of Russian potato salad and I still don’t know its connection to Laurence Olivier), shredded sweet carrot salad, homemade buttermilk cheese (the other thing I forgot I know how to make) which we spread on crackers with kim chee, a Russian super-garlicky cheese which we spread on anything we could find, and a Dianda’s rum cake the size of Utah. Our friend Robert brought homemade Kahlua and there was lots and lots of vodka.

My brother-in-law, Bill, my mom, and I. We’re standing in front of a bunch of my drawings and watercolors from my artschool days, as well as a photo from my short-lived career as a hand model… 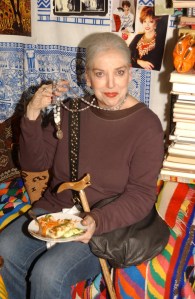 Our dear family friend Lisa Boyle, who’s known me since mom was preggers. She was an opera singer in her day, and was once conducted by Stravinsky himself (the premiere of The Flood, which, curiously, took place in Santa Fe).

Me with Shea and Liam Wahab, sons of family friend Afreen. I’ve known them all their lives and embarrassed them heavily at my party by telling a story about them from when they were wee ones. Afreen held my father’s wake at her house, an enormous gift to us for which I’ve never thanked her properly. At the time, I felt pretty down for obvious reasons, but also because I’ve never had much patience for the sort of palliative talk that goes on at such events. All the “I can feel his presence,” “he’s in a better place,” and “he’ll always be with you” platitudes were not having the intended assuasive effect on me, and I had had a difficult time all night not punching the wall or tearing my hair out. At the end of the evening, everyone had left and Afreen sat down to talk with me. I knew she was laboring to comfort me, and I didn’t want her to labor; it was a futile effort, and the thing that mattered was that she cared, which I already knew. So although I knew she was just being lovely and caring, listening to her I just grew more tense and unhappy. I wished something might come along to break the solemnity of it all, and suddenly, Shea and Liam, both small children then, rushed in from their bedroom wearing only their pajama tops. They glanced at each other, I guess to get the starting note, and, in unison, started flicking their little things and shouting “Boing! Boing! Boing!” Afreen shreiked and chased them back into their room, leaving me laughing on the floor. It was definitely the best moment of the wake.

HAHAHAHA! That’s my sister Maya in the foreground. Nicola, a high school friend to the left, and Steve and Anson further back, both of whom I haven’t seen in nearly twenty years. We went to elementary school together and lost touch when we all moved on to middle school. We reconnected thanks to facebook. Anson’s girlfriend Lac sits to his left.

Afreen, the mother of Liam and Shea, and her boyfriend Hartmund. People who have seen my book will recognize her from several of the photographs in it. She was one of my father’s favorite models. 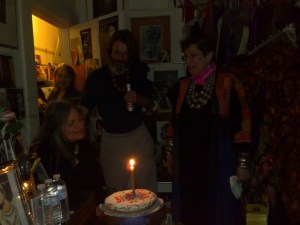 We had a mini-celebration for Rebecca’s birthday, which is close to mine. Rebecca has known me all my life, having danced in my mother’s troupe in the seventies and eighties. Another of my father’s favorite models.

Me with Rachel, a dear friend from the theatre, and a great actress who’s currently doing a smashing job of Martha in Who’s Afraid of Virginia Woolf?.

My sister Maya and her husband of twelve years, Bill. Disgustingly in love with each other.

This entry was posted in Uncategorized. Bookmark the permalink.