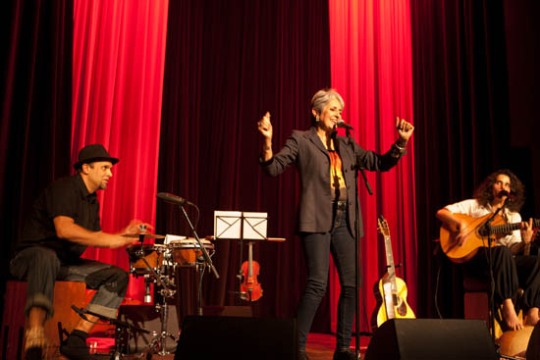 Joan Baez with her son, Gabriel Harris on the cajon, and Marianne Aya Omac. Photo by Jamie Soja

As diverse as the music performed in concerts is, so are the appearances of the audiences. James Mollison documented a spectrum of what he calls the “tribes” of attendees in his photography project and book The Disciples, a rough census of personae that converge around the archetypes represented by the musical acts Mollison followed. The grouped images of said disciples invite one to guess, before reading the captions, which performers each had come out for. It’s not hard: men in trucker hats and denim overalls, Merle Haggard. Men holding up sagging jeans by the crotch and women whose skirts barely reached their own, P Diddy. Union Jack mini-dresses, leopard print and afros? Spice Girls. Cinched lumberjack shirts, curly blonde wigs and feathery cowboy hats? Dolly Parton, obviously. Kiss makeup? You got it.

Recently at Yoshi’s in San Francisco, Joan Baez performed as a guest rather than as the main act, but the audience distinctly appeared to be of the Baez tribe. The restaurant side of Yoshi’s seemed to be patronized by slick young things coifed, Spanxed, and pressed into coy “my-eyes-are-up-here-jerk” cocktail attire. But inside the jazz club, the tone was far less bothered. The patrons were older, their dress casual and accented by the occasional ethnic jewelry piece. The shoes were decidedly comfort-oriented, the hair natural in color and texture, the makeup minimal on gracefully senescent faces. Sure, they could have been there for the comparatively unknown headliner from Montpellier, France,Marianne Aya Omac, but it seemed more likely that these were the people (or a small portion of them) who for the past five decades have been following Baez, rapt by her ever-burnishing voice, loving the ground whereon she stands. (continue reading)