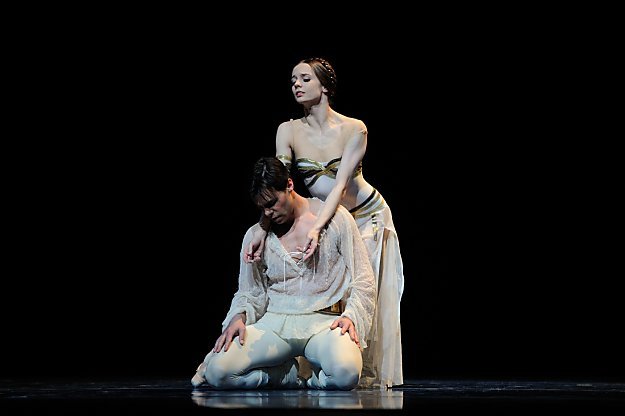 Helgi Tomasson, the San Francisco Ballet’s artistic director and principal choreographer, combined elements of modern and classical ballet to create “Trio,” set to Tchaikovsky’s Souvenir de Florence. While much of the ballet recalls the aggrandized ballroom prancing one sees so often, softened arm positions and unusual footwork modernized the movements. The women’s richly autumnal-colored dresses, though shaped like a slightly less stiff version of the lampshade skirt (ballet’s frumpiest costume), were slit to the hip, and allowed a leg to swing out in many steps and kept the piece from looking as primly traditional as it might have otherwise. But while the first and third movement of “Trio” seemed trapped in a sort of generalized exuberance, the middle piece offered a heartbreaking, and ambiguous, drama.

The program notes describe the pas de deux (which turned into a pas de trois) as “lovers and death,” but I admit I had a less allegorical interpretation: the lovers and the cold, controlling husband. The lovers’ pas de deux was delicate and sensuous, and somehow maintained these qualities even after the intrusion of the third character added desperation and struggle to the combination. Dana Genshaft’s acting abilities helped, alternately evoking tenderness and fear as she was passed back and forth between the two men battling for possession of her. (continue reading)